The Bougainville Moustached Kingfisher is a rare and vividly coloured bird likely to be restricted to living in the interior of montane old-growth forest, with a recent record from 800 m (Dutson 2011), although calls thought to belong to the species have been reported from lowland swamp-forest (Bishop 1987). Very little is known about this spectacularly coloured species. There is a report of nesting in an arboreal termitarium (Mayr 1945, K. D. Bishop in litt. 1983, del Hoyo et al. 2001). Local people around Panguna report the species above 1100 m and have shown one recently-killed bird to visiting birdwatchers but there are no other data on their ecology (P. Gregory pers. Comm. 2016). This spectacular species is judged to be Endangered on the basis of a very small estimated population which is suspected to be declining. However, further research may reveal them to be more common and not declining.

The Bougainville Moustached Kingfisher is potentially threatened by introduced rats and cats which are common even at high altitudes (Leary 1991). 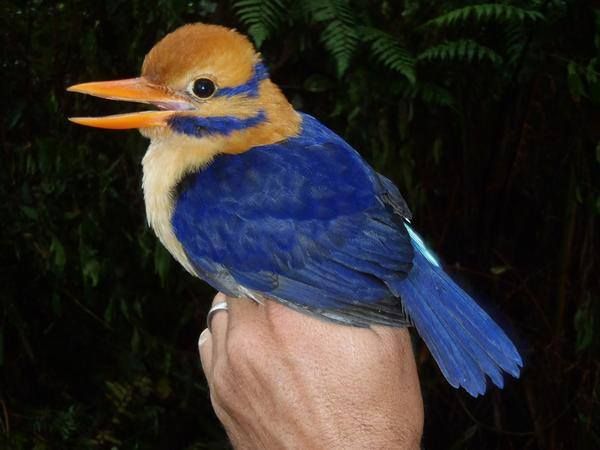 END_OF_DOCUMENT_TOKEN_TO_BE_REPLACED

Mel Lumby: The beautiful begonias of Borneo and beyond deserve our love and protection

END_OF_DOCUMENT_TOKEN_TO_BE_REPLACED

Anthropologist and author of ‘In the Shadow of the Palms’ Dr Sophie Chao: In Her Own Words

END_OF_DOCUMENT_TOKEN_TO_BE_REPLACED

The people versus Feronia: Fighting palm oil agrocolonialism in the Congo

END_OF_DOCUMENT_TOKEN_TO_BE_REPLACED

Health Physician Dr Evan Allen: In His Own Words

END_OF_DOCUMENT_TOKEN_TO_BE_REPLACED

The World’s Most Loved Cup: A Social, Ethical & Environmental History of Coffee

END_OF_DOCUMENT_TOKEN_TO_BE_REPLACED

5. Donate: Make a one-off or monthly donation to Palm Oil Detectives as a way of saying thank you and to help pay for ongoing running costs of the website and social media campaigns. Donate here