The Woodlark Cuscus is a nocturnal species found in both primary and secondary tropical moist forest. Animals shelter under epiphytes and in tree hollows during the day (Flannery 1995). Secondary regrowth provide the species with what locals say is their favourite food – nectar from a vine and a tree Rhus taitensis that quickly grows up in old gardens (F. Damon pers. comm.). Females give birth to a single young.

The Woodlark Cuscus’ are endangered in #PapuaNewGuinea and live on remote Woodlark island, slated for destruction by a huge #palmoil plantation. Protect these beautiful rare creatures and their home Join the #Boycott4Wildlife in the supermarket

The major threat to the Woodlark Cuscus, and indeed the current way of life for humans on the island, is a proposal by a Malaysian timber company to log almost half of the rainforest on the island. In addition a goldmine is planned for the island, and this has the potential to degrade habitat for the species. The Woodlark Cuscus is occasionally hunted for food by local people, but they are not a preferred food item (unlike pigs and fish), and hunting appears to have little impact on population abundance. Listed as Endangered because they live in an area less than 1,300 km², all individuals are known from two (possibly 3) locations, and there is an imminent risk (=projected decline) to their remaining habitat due to plans for logging and mine development on Woodlark Island.

You can support this beautiful animal

There are no known conservation activities for this animal. Make art to raise awareness and join the #Boycott4Wildlife. 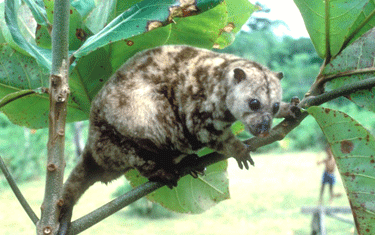